The Grid Square KO09 is located in the northern part of the Baltic Sea, between Sweden, Finland and
Estonia. Luckily it touches Aaland Islands so we could stay ashore. But since the square doesn't have
any ham residence, what we know of, it is rarely activated. And on Microwave bands it is even more
seldom activated. According to reports OH0NC worked 10 GHz from KO09 in 1987. But that was a long
time ago so our self-imposed duty was to put things right and activate KO09 on 2.3 GHz in a Contest.
We leave the discussion why it is important to activate squares. It should be obvious.
Aaland Islands, OH0, is also a unique DXCC Entity but that was not important for our expedition,
the rare square was the focus. 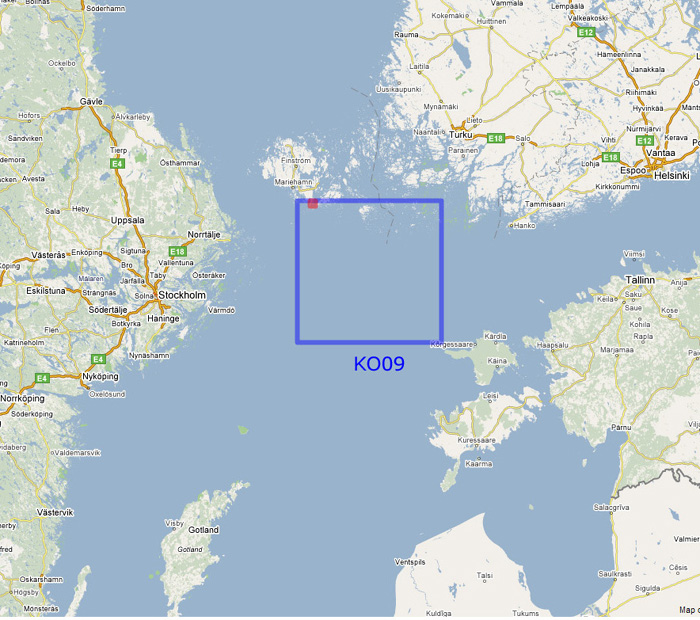 The Map with the square is an extract from F6FVY public Locator Map.

Planning is a vital card in this game. Many have pointed that out before but I think it can be said
again. Is something missing; is the question that rings into your head all the time. Even though this
was a relatively small expedition in comparison, there are a number of critical details that need to be
under control for a successful expedition. Especially if you are using new unproven equipment.
A couple of days before departure we stowed in the parabolic antenna and some other critical things
to make sure that everything was ok. We probably struggled with to much spare parts to be on the
safe side. But, again you don't want anything important to be missing when you are out in the field.


Setting up the station

We installed the equipment in an old lookout tower just by the seaside. The tower was about 10 mtrs
high with good takeoff in all directions except maybe to the north. But we didn't expect any stations
in that direction.
We had inspected the tower last year when we worked 2.3 GHz from KP00. So we had already made a
claim for the tower and knew that it would be almoust perfect as a temporary radio site.
If it still was there. But it was.
We couldn't afford to fly in antenna and gear with a helicopter, that was for certain, so we simply had
to take a walk in the woods with car battery and everything. In spite of the fact that we were four
persons we had to do several rounds before everything was ready. But no pain no gain as the saying
goes. 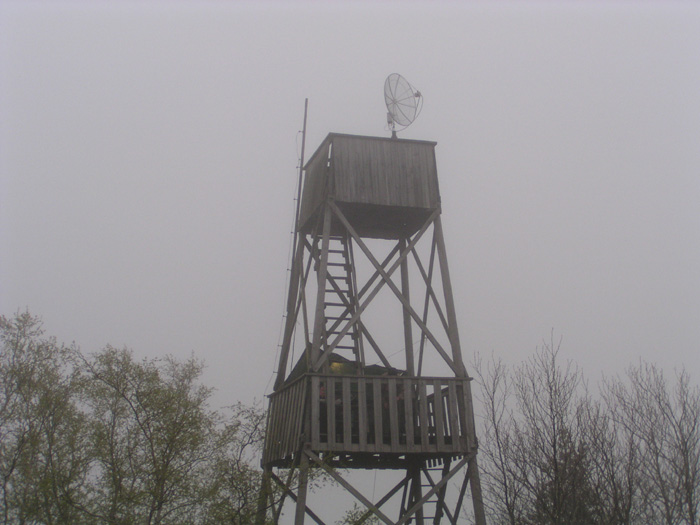 The dish in the mist. Photo: OH0NH

In the four hour the NAC-contest lasted we worked all stations who were there in the noise, except
for one fish we didn't catch. But we will take him next time. Of the eleven stations that we worked
the longest distance was 539 km in contact with SM6DJH on the Swedish west coast. Over all the
propagation wasn't too bad and maybe we had some help from rainscatter or aircraftreflections.
The weather was foggy and drizzle and rather cold so we had to improvise a shelter in the tower.
A couple of tarpaulins come in handy for that job.

The contest ended at midnight local time so it was rather dark. But we were prepared with illumination
to work in. We removed all equipment and restored the site to its former condition to make sure that
radioamateurs will maintain their good reputation. And Aaland Islands still be neat and clean.

The expedition worked out fine and almost as planned. And the equipment performed very well.
Weather and propagations are very hard to predict but it wasn't too bad. No problems with
mosquitoes anyway.